The cryptocurrency market has had another red week as Bitcoin (BTC), and all significant altcoins spiraled down amid growing bearish sentiments. Speculations about a proposed crypto ban in India added fuel to the fire, while rumors and speculations increased the pressure.

The total capitalization of all digital assets in circulation settled at $271 billion. Altcoins are a mixed picture with EOS and Bitcoin SBV showing double-digit.

What’s going on in the market

This week in crypto has been a perfect source of topics for tabloids. The cryptocurrency news feeds were packed with scandals, leaks and drama. However, they produced little effect on Bitcoin and all significant altcoin prices, just as usual. The market continues going about its own life uncorrelated with either external events and internal developments.

India gets tough on cryptos

Cryptocurrency drama in India has attracted lots of attention. The country has been rumored to ban digital assets completely. Those who mines, generates, holds, sells, transfers or issues cryptocurrency may be jailed for up to ten years and charged with $3.63 million fine (250 million rupees). At least that’s what and Indian government panel recommends to do.

While the decision has not been made yet, the Indian industry experts are in dismay as these measures would push the country back in terms of innovations and technical development.

“If the government decides to take such a drastic step then India will stand to lose out significantly on the technology front,” Sathvik Vishwanath, co-founder, Unocoin, an Indian virtual currency, said in the interview with Reuters.

Crypto Twitter is also full of critical comments. Most of the influencers and opinion leaders are concerned about what is happening in India.

Notably, Nouriel Roubini, a vocal crypto critic, believes that the Indian government is just about right with the ban. No surprise.

Read also: Cryptocurrencies are not banned in India. Not yet

Meanwhile, India is not the only country that gets tough on the industry. Estonian regulators consider a crackdown on the industry, which has poor oversight at this stage. This development might have profound consequences for the industry as Estonian jurisdiction has attracted many blockchain and crypto-related companies.

Read also: Estonian regulators to crack down on cryptocurrency market

John McAfee detained and then released by the authorities and Justin Sun with stones in the kidney added some suspense to the week. The CEO of TRON Foundation postponed his overhyped lunch with Warren Buffet due to health issues. There were rumors that he had issues with Chinese authorities that would not let him out of the country. However, they were not confirmed as Sun was seen at a party in San Francisco.

While Sun apologized before the community for over-hyping the lunch with buffet, the reputational harm had been already done.

Bitcoin has had another a bearish week. The price of the most popular cryptocurrency attempted to move above $10,000 twice but failed to hold the ground. This development increased the bearish sentiments in the market and pushed the price towards $9,512. At the time of writing, BTC/USD is changing hands at $9,800, down nearly 6% in recent seven days.

It is worth noting that Bitcoin’s market share dripped below 65.o% It means that altcoins were doing better this time around.

Meanwhile, a strong sell-off below $10,000 has damaged the mid-term technical picture for BTC/USD. We will need to see a recovery above the said area to mitigate the immediate bearish pressure and allow for a sustainable recovery towards the next important barrier at $11,000.

Looking technically, this area has stopped the sell-off on several occasions, which means the bulls will have a hard time pushing Bitcoin’s price higher. However, once it is out of the way, the recovery is likely to gain traction with the next focus on $12,000 and $12,600 (this resistance area is created by the upper boundary of daily Bollinger Band).

On the downside, a sustainable move below $9,500 handle (weekly low) will increase the bearish pressure and bring $9,000 back into focus.

Considering that the Relative Strength Index (RSI) on a daily chart is flat, we might expect that the market will stay in the current range for some time.

The Forecast Poll of experts worsened since the previous week. The expectations on all timeframes deteriorated significantly with the majority of experts forecasting bearish momentum on weekly and monthly timeframes. Bitcoin’s price is expected to stay below $10,000. On a quarterly basis, the forecast remains mildly bullish with an expected price above $11,000. 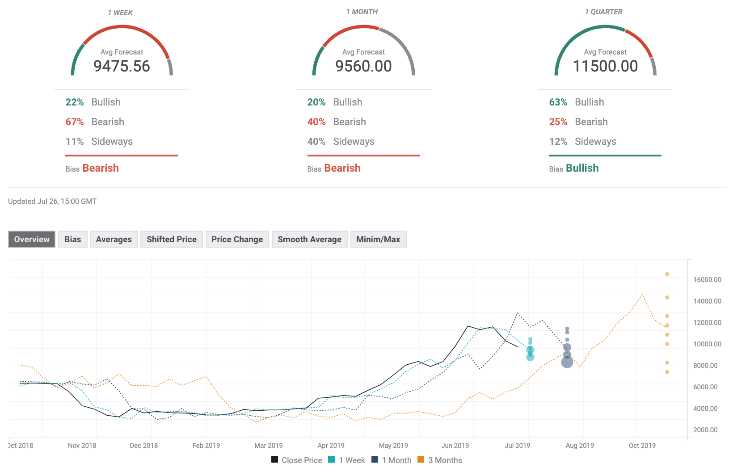 Information on these pages contains forward-looking statements that involve risks and uncertainties. Markets and instruments profiled on this page are for informational purposes only and should not in any way come across as a recommendation to buy or sell in these assets. You should do your own thorough research before making any investment decisions. FXStreet does not in any way guarantee that this information is free from mistakes, errors, or material misstatements. It also does not guarantee that this information is of a timely nature. Investing in Open Markets involves a great deal of risk, including the loss of all or a portion of your investment, as well as emotional distress. All risks, losses and costs associated with investing, including total loss of principal, are your responsibility.

A New Diamond In The Making XMV

DASH is unstoppable, the coin increased by 32%

Now Is The Time To Ditch The Dollar

BitMEX undergoes investigation by the US Regulator